Although returning to live in Newlyn was tempting Thomas decided on another course of action and took his wife on the long voyage to Australia on the fully rigged sailing passenger clipper, Torrens., leaving England on October 30th 1883.  Their daughter Phyllis remained in Kettering with her grandparents.   Thomas and Caroline arrived in Port Adelaide on January 8th 1884 where they transferred to the SS South Australia and sailed to Melbourne where they were met by John Speechley Gotch, a wealthy distant relative who had met Tom when he visited England in 1874.  John Gotch was an art lover and he arranged for Thomas and Carrie to hold a joint exhibition of their work which they had brought with them, at Melbourne’s Fletcher’s Art Gallery in February 1884.

The most important painting exhibited by Thomas Gotch was one entitled Mental Arithmetic.  It depicts an elderly bearded fisherman sitting holding a knife and plate of food being watched by a small girl.  It is thought that Thomas painted this in November 1883 from sketches he made that summer in Newlyn.  Melbourne City Gallery wanted to buy the painting but baulked at the £200 selling price.  However, John Gotch bought it and donated it to the gallery.  Many of John Goth’s paintings and sketches were sold as well as work by his wife Carrie and the couple made more than enough money to pay for their sea passages.

Tom and Carrie returned to England on the Torrens calling at Cape Town, St Helena and the Ascension Island for the vessel to replenish supplies.  They eventually returned to London on July 3rd 1884.  The couple left the English capital and journeyed to the West Country looking for suitable accommodation.  They tried Brixham and Looe but finally settled on the Cornish town of Polperro where they lodged at the Louriet Hotel and were soon joined by their ten-month-old daughter and her nurse.

Children featured in many of Gotch’s paintings.  Probably the best known is his 1894 work entitled Child Enthroned.  Like many other depictions of the young there is a mystical element about the portrayal of the young girl.   His eleven-year-old daughter Phyllis was the model for The Child Enthroned.  Her father’s Madonna like depiction was, he said, down to his time spent in Italy in the summer of 1891.  The painting is testament to Gotch’s ability as a portrait painter, especially his love of child portraiture and his competency in depicting fine detail in ornate fabrics.  The painting when exhibited to the public that year at the Royal Academy was rapturously received and established Gotch’s reputation as an artist.

Another painting featuring Gotch’s daughter was his 1896 work entitled Alleluia. It was a major demonstration of his Pre-Raphaelite style.  Along the top of the painting, we see inscribed in Gothic lettering on a background of gold leaf, a Latin quotation which reads:

The inscription is taken from Psalm xlvii: 6 and 7, which was printed in the catalogue of the 1896 Royal Academy exhibition:

It is a painting featuring thirteen richly clad children singing against a gilded background and his thirteen-year-old daughter is at the centre rear of the group with her hands clasped in prayer.  In front of her is a small figure with amber curls.  This is her cousin Hester Gotch.  When it was first shown at a local exhibition in Newlyn it was criticised by the local press because they believed Gotch had broken with the Newlyn tradition of painting.  The art critic of the Cornish Telegraph quipped that he doubted whether the time it took to complete (nine months) was worth the effort.   The art critic of the local weekly newspaper, West Briton, criticised the work saying:

“…It would be easy enough to say outright that we don’t like the thing and have done with it.  It is not possible to take ordinary children of today and pictorially attempt to transform them into choiring cherubim, without coming within consciousness of incongruity…”

Fortunately for Gotch when he submitted the work to that year’s Royal Academy exhibition the receiving jury accepted the painting had it hung at the most advantageous position, (hung on line). The work of art, which is part of the Tate Britain collection, was bought for the Nation under the terms of the Chantrey Bequest, following its exhibition at the Royal Academy.  The Chantrey Bequest, set out in the will of sculptor Sir Francis Chantrey, was of primary importance to the foundation and development of a national collection of British art at the Tate Gallery and it constituted the gallery’s main purchasing fund from its opening in 1897 until 1946.

Another of Gotch’s paintings featuring a group of children was completed in 1899. It was entitled A Pageant of Childhood.  It depicts a procession of nine children of varying age, the eldest at the rear and the youngest at the front crossing a tiled hall in front of a fresco of Father Time, who we are aware will, in due course, carry off even the youngest of the children.  It is a colourful depiction of children enacting an historic pageant.  Some like the two boys at the centre play long horns whilst behind them are two girls, one with a drum and one with a set of symbols.  Take a look at the various children.  Some, with thoughtful expressions, are taking the enactment very seriously whilst others appear light-hearted and, in some respect, they personify children of different ages at play, a representation of the stages of life.  It was Gotch’s own evocation of innocence and youth.  The painting was completed just before the family left Newlyn and exhibited at the Newlyn Gallery in March 1899.  It was shown at the 1899 Royal Academy exhibition and appeared at Liverpool’s Walker Art Gallery, after which the Liverpool Corporation purchased the work and is part of the Walker Art Gallery collection.  This painting was completed close to the time that the Gotchs moved to a new house and went to live in Shottermill. 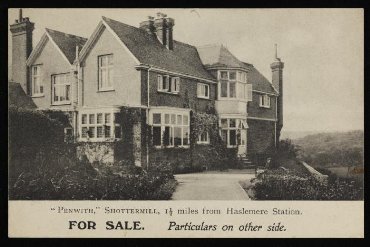 Thomas Gotch had decided to relocate his family to Shottermill close to the town of Haselmere, West Sussex, forty miles south west of London and twenty-five miles from the south coast of England.  At the end of 1898 Thomas started building his new home, named Penwith and the family were able to move in in October 1899.  Penwith was situated on a hillside at the end of a long twisting drive, which rose above the ponds of Shottermill.  It was a large six-bedroom residence with two drawing rooms, a large kitchen and two purpose-built studios.

In 1900 Thomas Gotch’s main work was entitled The Dawn of Womanhood which appeared at the 1900 Royal Academy Exhibition.  The painting depicts the child enthroned being confronted by the vision of approaching motherhood.  The phantom figure on the left represents Womanhood.  She is dressed in opalescent drapery of pale blue, gold and silvery primrose.  She is wearing a mask, as legend has it that all who are no longer children must conceal themselves which probably harks back to the story of Eve, who after eating the forbidden fruit was ashamed of her nakedness and sought to conceal it.  Sitting on the steps of the throne, to the right, is the familiar winged sprite representing the spirit of childhood, who is aware of the strange presence and makes ready to take flight for ever from the girl on the throne.

Painted around that time, in 1930 — a year before Thomas Cooper Gotch’s death — The Exile is shrouded in mystery. As of now, we know nothing about the identity of the sitter or about the suggestive, tantalizing title of her portrait.

Thomas Gotch exhibited at the Royal Academy from 1880-1931, in all showing seventy of his paintings. He was elected to the Royal Society of British Artists in 1885 and the Royal Institute of Painters in Watercolour in 1912. He was a founder member of the New English Art Club in 1886 and served as President of the Royal British Colonial Society of Artists between 1913 and 1928.   Gotch was fêted at the Salon and won medals in Chicago and Berlin.

Thomas Cooper Gotch died aged seventy-six of a heart attack while in London for an exhibition on May 1st, 1931.  He was buried in Sancreed churchyard in Cornwall.   Also in the graveyard of St Sancredus are buried fellow Newlyn School artists, Stanhope Forbes and Elizabeth Forbes.

Thomas Gotch’s wife, Caroline, died on December 14th, 1945 aged 91 and their only child, Phyllis Marian Gotch became Marquise de Verdières when she married André Marie, Marquis de Verdières in 1922. She died in Hong Kong on April 24th, 1963 aged 81.   She is buried with her parents in Cornwall’s Sancreed Churchyard.