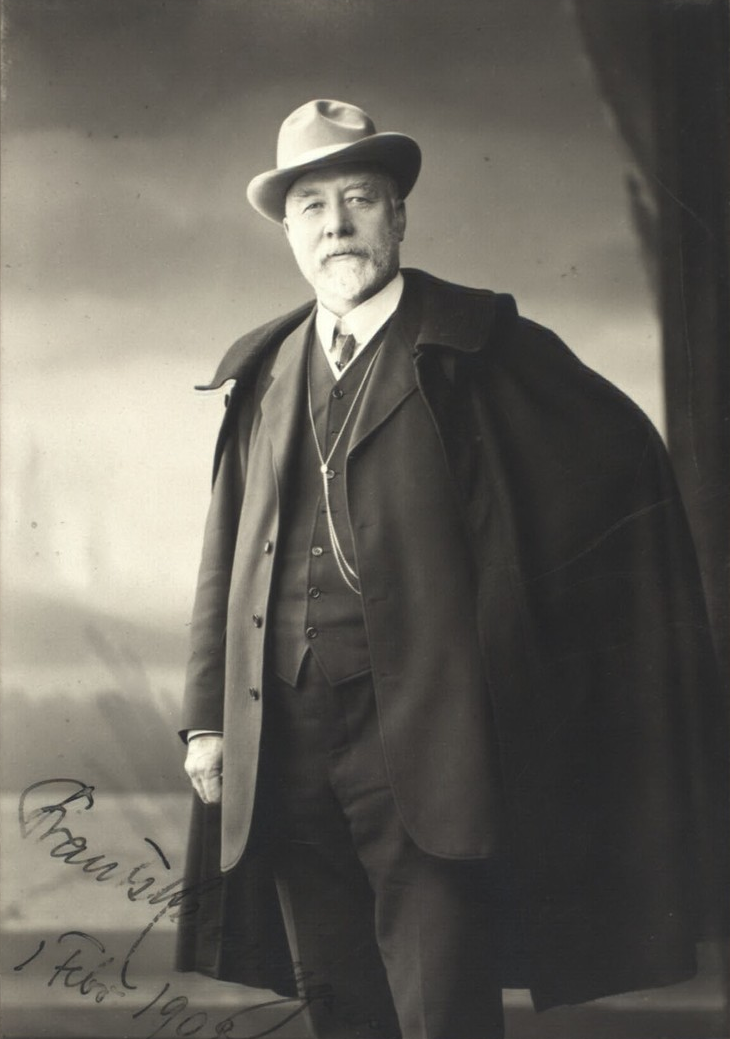 Today I am looking at the life and works of the Danish painter and illustrator, Frants Peter Diderik Henningsen.  Henningsen was born in Copenhagen on June 26th 1850. He was the oldest of three children of Frants Christian Henningsen, a wholesaler and his wife Hilda Christine Charlotte Schou.  Frants had a younger sister Euphemia and a younger brother Erik. Henningsen attended the Borgerdyd School in the Christianshavn district of Copenhagen and after graduating from there he enrolled at the Christian Vilhelm Nielsen drawing school in preparation for admission to the Royal Danish Academy of Fine Arts School of Architecture which he attended from October 1870 on a five-year course.  After completion of the Academy course, he, like many other aspiring painters, decided to further his art education in Paris.  In 1877 he enrolled at the atelier of Léon Bonnat, which was attended by other Danish students.

Frants Henningsen, although in France and in the midst of plein air painting and Impressionism, was more of an Academic painter who created his artwork in a studio.  He was very much influenced by the Realism genre of painting and the socially oriented naturalism of Jules Bastien-Lepage, Jean-François Millet and Jules Breton.  Henningsen’s paintings often added the human dimension to the depictions of deprivation, human suffering and poverty.

One of his most famous painting is his 1893 work entitled A Funeral.  It is a poignant depiction of a funeral and one which Henningsen has cleverly manipulated to add to the sense of sadness.  The setting is the Assistens graveyard in the Nørrebro area of Copenhagen, which was originally a burial site for the poor and was laid out to relieve the crowded graveyards inside the walled city, but which at the start of the nineteenth century had become fashionable and many leading luminaries of the Danish Golden Age, such as Hans Christian Andersen, Søren Kierkegaard, Christoffer Wilhelm Eckersberg, and Christen Købke were laid to rest here.   Henningsten, using dark tones, has depicted the setting as a very gloomy winter’s day.   The wall of the cemetery is grey and devoid of any colour.  There seems to be only a few people who will be taking part in the funeral service.  The main character is the widow, a pregnant woman who takes the arm of an elderly gentleman, whom we presume is her father.  She looks down as she is about to enter the cemetery.  Her face is drawn and she has a greyish-white facial complexion.  In front of her are her two children.  In the background we see two men, standing apart from the mourners, gazing at the family.  Like them, we are merely spectators witnessing the harrowing event.  Henningsen received a great deal of praise for the painting, which was immediately bought by the National Gallery of Denmark.

In the Spring of 1878 Henningsen along with fellow Danish painters, Peder Severin Krøyer, Frans Schwartz and the German artist, Julius Lange travelled to Spain,where they studied the works of the great Spanish painters such as Velazquez and Francisco de Zurbarán.

In November 1880, in Copenhagen, thirty-year-old Frants Henningsen married twenty-one-year-old, Thora Vermehren.  She was the daughter of Frederik Vermehren, the genre and portrait painter in the realist style. The couple went on to have five children, four sons and a daughter.

The Second Schleswig War was the second military conflict of the nineteenth century over the Schleswig-Holstein Question . The war began on February 1st 1864, when Prussian and Austrian forces crossed the border into Schleswig. The army of Denmark fought the Kingdom of Prussia and the Austrian Empire and Henningsen depicts a conflict between the two sides in his great 1901 work entitled A Hero from 1864.  The setting is a country road in Schleswig. In it we see a lone Danish Hussar facing a large group of the enemy invaders.  His heroics are captured in the painting but we know his fate is sealed.

Another casualty of the war was depicted in Henningsen’s 1901 painting A Fallen German Hussar. Once again we see the result of battle.

In the late 18th century, it was common practice for artists from Copenhagen to spend their summers in the countryside and seaside north of the city and a number of artists began lodging in Hornbæk, either in the local inns or privately. Hornbæk is a seaside resort town on the north coast of the Danish island of Sjælland, facing the Øresund which separates Denmark from Sweden.

In 1873, twenty-two-year-old  P.S. Krøyer, the celebrated Danish painter, arrived in Hornbæk along with three artist friends Frants Henningsen, Viggo Johansen and Kristian Zahrtmann. Later many other painters would follow in their footsteps.  The four young artists settled along the northern coastline of Zealand, fascinated by the sea, the broad beaches, and the blue hills of Kullen on the Swedish mainland on the horizon.

They were also fascinated by the weather-beaten faces of the local fishermen and listened intently to their tales of peril on the sea.  P.S. Krøyer, reported on his first time in Hornbæk with his friends:

“…I had a splendid summer this year – well, not as far as the weather was concerned, for it was stormy and restless – but rather because I was, for the first time ever, able to spend an entire summer in the countryside out in the open air, far removed from the troubles and drudgeries of the city, and with three other painters whom I count among my very best acquaintances; all this has been to me a tremendous pleasure. We enjoyed some lovely trips (being based in Hornbæk on the north coast of Zealand); we went on a sailing trip to Kullen, on excursions to Gurre, Nakkehoved, to Tisvilde on Midsummer Night and to various places besides. The way of life there was utterly attractive: to venture out into the fresh, clear water en compagnie in the mornings (I learnt to swim there); and the pleasant evenings spent either walking in the woods or the beaches or in conversation back home in our pleasant digs, speaking and smoking our pipes; a splendid, idyllic life…”

One of my favourite paintings by Henningsen is his 1888 Realist work with the strange title, Forladt. Dog ej af venner i nøden, which translates to Abandoned. However, Not By Friends in Need.   Many of his paintings depict unfortunate occurrences in the lives of middle-class people living in Copenhagen during difficult times. In this work, it is all about the fate of the single mother. It is interesting to note that Frants Henningsen painted this picture in the same year as the law that allowed single mothers to receive money from absent fathers in the form of child support until the child reached the age of ten.  It was not until a law was passed on May 27th 1908, that child support was to be provided until the child reached the age of eighteen.  However, even around the turn of the nineteenth century, the single unmarried mother had very little chance of being able to keep her child with her and many of these children therefore went to orphanages.

One of his best loved genre pieces is his painting entitled Hos pantelåneren (At the Pawnbroker) in which he depicts a group of visitors to the emporium, both young and old, examining the goods on offer, all eager to find a bargain.

It was not just the working classes that featured in Henningsen’s paintings. The upper class lifestyle was on view in his depiction of Copenhagen café life in his 1906 painting Industricafeen (A Café in Copenhagen).